Brenda and her 1 Point Turn

Brenda has been a member of the club since she joined in 1951 when she was 14. Brenda, with the support of her husband Jim, set a new national cycling record by clocking up more than 203 miles in a 12 hour marathon at the age of 71 in 2007. Still actively riding her bike today, and very much a part of the club helping run Time Trials with Jim as well as serving refreshments at Roller training with the help of other veteran members of the club.

Professional 1986 – 1995 with 28 professional victories, including beating Tour de France winner, Greg Lemond, in a time trial stage in, I think, the Tour du Pont in the USA.  Yes, the man who won the TdF by 8 seconds in the final time trial stage.  Won or podiumed in USA, UK, France and Australia.

Started his cycling career with EBCC!!

Allegedly not selected for the 1992 Barcelona road race team on the grounds of age!

As an amateur, competed in the 1976 Montreal Olympics in the road race and team time trial, finishing 6th in the latter.  55 career victories including wins in Spain and podiums in France and Belgium.  West Yorkshire Road race champion; stage winner in Milk Race Tour of Britain; rode for GB in the Peace Race, amateur equivalent of the TdF; won 3 stage races in the UK and finished 2nd in two in Europe.  Podium finisher in the National Road Race Championships.

Rayner joined his first club, East Bradford CC, at 12 in 1979. He then joined the Bradford Wheelers – Ellis Briggs – Saturne in 1984, and won the national junior road race championships at Stoke on Trent. Early in 1984, he moved to Italy, joining the G.S.Porcari-Fanini-Berti Team, with which he stayed until 1986.[2]

Rayner competed in the junior world championship in 1985.

Rayner moved to the Netherlands in 1991 to ride for Buckler under former world champion Jan Raas. He joined I.M.E.-Health Share in 1993, moving to the United States. He returned to Britain in 1994 after an unsuccessful year and joined Lex-Townsend, coming second in the national criterium championships in Milford Haven. Rayner was killed following an altercation with a bouncer at a nightclub in Bradford, in November 1994.

Jake was one of the earlier members of East Bradford’s Kids Saturday Bike Club where he started riding as a very young boy.

This is his story:

Having been brought up by a family who love cycling it was obvious I would start riding at some point.

I started off by racing the local Cyclocross on a Sunday, following in the footsteps of my Auntie, Louise Robinson (2nd 2000 World Cyclocross championships). Every year I progressed even more, starting to race on the track and also on the road.

As a youth and junior I had a successful couple of years, winning national events and representing Great Britain in Cyclocross World cups, European Championships and World Championships, where I performed particularly strongly.

I made my move to a senior/elite level racing for 2014, where I raced in Britain, showing my strengths in the criterium events and kermesses.

Living and racing in Belgium for the 2015 season will bring me on another step, where I hope to gain some big results to set me up for my future in cycling and experience what my granddad, Brian Robinson did, who was the first British rider to win a stage in the Tour de France, riding grand tours, World Championships and Olympics.

Becks Womersley was born and raised in Mirfield, Yorkshire. It’s abundantly clear that she is incredibly proud and happy to have grown up in that part of the world as she describes Yorkshire as ‘obviously the best place to live’.

While seemingly everyone in Becks’ family was climbing on to a bike, she was more interested in ballet as child. But with a cycling family comes cycling trips out and cycling holidays, so it wasn’t long before Becks hung up her ballet shoes.

“Me and my brother would play on our bikes, go on family rides, and camping holidays with bikes,” she explains.

“When I was younger I watched my auntie race MTB/ Cyclocross & listened to some inspiring stories of my Grandad’s from the Tour de France.

“My brother Jake started racing cyclocross from a young age and I used to stand and freeze in a field watching him, so at the age of 15 I decided to give cyclocross a go.”

And give it a go she did. Alongside her brother Jake, Becks joined East Bradford Cycling Club riding her Titanium Airbourne on the Saturday close circuit sessions. After years of swapping the tyres for cyclocross and road, Becks eventually decided to race for her local bike shop – Sowerby Brother’s Cycles –  and got her first proper road bike, a Cannondale.

Since then Becks has been busy exercising her brain as well as her legs. She is now the proud owner of a degree in Fashion & Textile Buying Management, having just graduated from University of Huddersfield .

Following an impressive season at Corley Cycles – Drops RT, Becks was invited to race for Drops Cycling Team in 2016. Now the 23-year-old is looking to develop her skills further with Drops Cycling Team’s extensive national and international race calendar.

“But personally, I have had a couple of what I see as local wins, I won the Yorkshire RR Champs and Ilkley Crit. It’s always nice to get your hands in the air though. I was pleased with my result at National Champs, it wasn’t a big aim as I didn’t know how well I would be going but coming away with 15th wasn’t too bad.”

Comfortable and happy, Becks describes the relationship within Drops as well as showing appreciation for the support team.“Drops is an incredible environment to be in. To be sat here just before the start of the Tour De Feminin, Czech Republic is a crazy strange feeling!

Gordon Benson (born 12 May 1994 in Halifax, United Kingdom),is a professional British triathlete. He won the gold medal at the 2015 European Games in Baku, the first medal ever won at the European Games by Great Britain.

Gordon Benson is a member of the UK Sport Lottery Funded British Triathlon Podium Potential Squad. He is based in Leeds, where he grew up. He was educated at Leeds Grammar School and is currently reading Nutrition at the University of Leeds.

He was voted the British Triathlon Male Elite Junior Triathlete of the Year 2011 and 2012.

In June 2015, he competed in the inaugural European Games, for Great Britain in men’s triathlon. He earned a gold medal. The following month he was part of the British team that took the bronze medal at the ITU Triathlon Mixed Relay World Championships in Hamburg

Rob has been one of the dominant figures in national racing in 2016. Colden-based Scott, riding for the Yorkshire-based VCUK team, recently led the prestigious Junior Tour of Wales – traditionally a proving ground for future professionals – for four stages after dominating the opening time trial and will head to France on the back of a win in the Yorkshire Junior Championships last weekend.

He has now signed with team WIGGINS for 2017 as a full time Pro Bike Rider as an U23. A long way from his time as part of East Bradford Cycling Club and Kids Saturday Bike Club 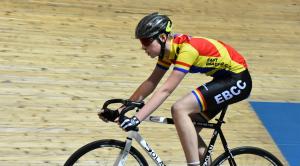